According to RUSSIAN RAILWAYS,

According to RUSSIAN RAILWAYS, 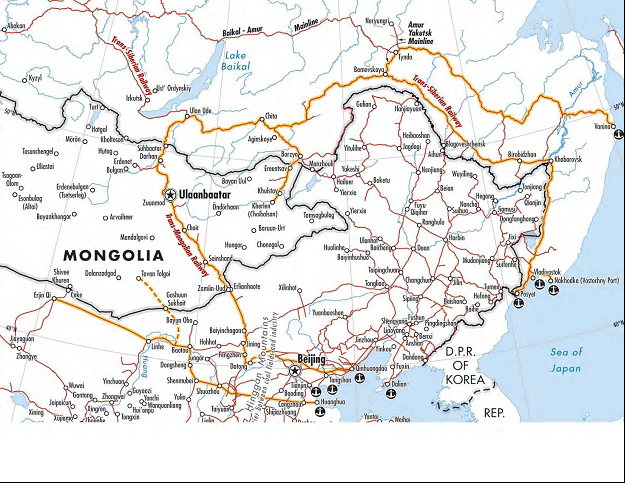 According to RUSSIAN RAILWAYS,
"On 28 October, a goods train left Ulan Bator station for Russia"s Vostochny  port for the first time, with 30 wagons carrying coal from Mongolia"s Tavan-Tolgoi mine, to be delivered to countries of the Asia-Pacific region. Up to this point, all freight routes from Mongolia via Russia went only to the West. The launch ceremony was attended by Russian Railways President Vladimir Yakunin, Mongolian Minister of Roads, Transport, Construction and City Planning Khaltmaa Battulga, and other officials. Russian Railways President Vladimir Yakunin said in his speech at the ceremony: "Today we are witnessing an historic event. This is the result of a colossal amount of work carried out jointly by Russia and Mongolia. We and our Mongolian colleagues have developed the whole transport chain - from creating a modern, powerful locomotive and rebuilding infrastructure to setting competitive tariffs. The launch of rail freight services from Mongolia to Far East ports is a clear demonstration of the potential for diversifying sales of Mongolian products on world markets."

The Russian Railways president said the new route will allow coal to be delivered from mines in Mongolia to Japan and South Korea via Russia"s Far East ports, and also in the future via the developing port of Rajin. Through these measures, Mongolian freight is being given a reliable link to the coast.

The first "pilot" train, launched today, is led by a 2TE-116UM locomotive, specially built by Transmashholding to withstand the Mongolian climate, with towing capacity of 6,000 tons. Russian Railways President Vladimir Yakunin commented that the Mongolian State Great Khural"s approval in June this year of a policy bill on railway transport, under which the national railway network is to be developed on the 1520 mm gauge standard, sets a good foundation for mutually beneficial long-term cooperation between Russia and Mongolia in the transport sector.

During their official visits to Mongolia in 2009, Russian President Dmitry Medvedev and Prime Minister Vladimir Putin signed a range of important intergovernmental accords, which were bolstered by bilateral agreements on developing the Mongolian railway sector. In May last year, Russian Railways and the Mongolian government set up the joint venture "Infrastructure Development", to provide an efficient platform for attracting investment for the development of the Mongolian rail system.

Since December 2009, Russian Railways has acted as beneficial owner of the Russian share of the Russian-Mongolian joint stock company Ulan Bator Railway. In this brief period, the companies have jointly made substantial progress in the technical re-equipment and modernization of the network. In particular, in 2009 Russian and Mongolian specialists completed, ahead of schedule, work to lay 108 km of continuous welded rail track on the Mandal - Davaany line, which enabled an increase in service speeds to 120 km/h.

A decision has also been taken to provide technical support for Russian Railways-owned goods wagons, locomotives, and locomotive crews. As a result, the companies have managed for the first time in many years to make the railway"s operations loss-free, and ensure stable growth in the volume of freight."

According to leading Mongolian news portal news.mn on  October 31,2010" the first trainload of coal from the Mongolian Gobi left on Thursday on a trial run all the way from Choir to the Vostochny port in Russia.  The coal will first go to Naushki, 638 km from Choir, where Russian Railway will take over from Ulaanbaatar Railway for the final 4,041 km of the total 4,679-km journey. The Infrastructure Development LLC is responsible for the epoch-making run.

The train carries 2,000 tons of coal from Tavantolgoi. After a year of talks Russian Railway has agreed on a 52% discount on freight tariff, making it three times cheaper than the rates charged by China. Ulaanbaatar Railway, however, has not lowered its rates that were raised on September 25.

The trial run is to check if international transportation regulations can be met, and to try out the loading and unloading process, and to see how much time all the paperwork takes. Altogether  one million tons of coal will be transported this way every year.

Yakunin noted that the locomotive being used for the trial is of the most advanced type. Upgrading of Ulaanbaatar Railway will be needed to allow easy rides for 30 such locomotives planned to be used for coal transportation. The upgrading work will be done by Russian Railway once it gets loans for this from Russian banks.  Once Russian Railway has laid new tracks over a 108-km stretch, the train could travel 120 km an hour between Mandal and Davaa.

Yakunin yesterday called on Prime Minister S. Batbold, who referred to the significance of the trial run, and stressed the need to overhaul the entire technology used by Ulaanbaatar Railway so that its operations can reach international standards. Yakunin informed the Premier of plans in this respect. He also hinted that the next head of Ulaanbaatar Railway could be a Mongolian and mentioned three names from which one could be chosen. They are L. Khangai, a former Ambassador to Russia; L. Khaltar,  Deputy Director for Social Issues with the railway, and T.Ochiukhuu, Deputy Minister of Finance. The Russian team also attended a meeting of the railway"s General Committee."

"This is an exciting and historic development for Mongolia, Mongolian companies that mine bulk commodities and in particular Sharyn Gol JSC.  The launch of rail freight services from Mongolia to Far East ports will help transform Sharyn Gol JSC into an International mining company by expanding its current markets (Mongolia, Russia and China) to countries such as Japan and South Korea.  The rail link may further reduce dependency on any one customer and make Mongolia based mining companies, such as Sharyn Gol JSC, more profitable and competitive.  I think this is another great milestone in the transformation of the Mongolian economy."

"It is good for Aspire and the Ovoot Project. In order to reach Japanese and Korean markets we need to have a rail link from Ovoot to Erdenet, which is the closest rail head. Access to the eastern Russian ports would then be via the trans-Mongolian and Trans-Siberian rail network.

We have identified a feasible rail route through a scoping level study undertaken by Calibre Rail. Aspire would need to build a stand alone routeto Murun, the provincial capital of Khuvsgul Province, which is a distance of 160km. From Muren to Erdenet is a distance of 390km, and this will probably be built in conjunction with other entities."

According to World Bank Southern Mongolia Infrastructure Strategy Report, "It would be useful for Mongolia to have an alternative export route through Russia, if only to gain greater bargaining power in negotiating freightrates for export through China. Exports through Russia will, however, be difficult to achieve unless current practices within Russia can be changed. This would require inter-governmental discussions to address upgrading of Russian rail capacity, changes in rail freight pricing arrangements, and access to Russian port terminals.
Russia applies discriminatory freight charges to foreign coal as opposed to domestic coal. Rail freight for foreign coal from Naushki to Vostochnaya (4,047 km) would cost about $85/tonne. Russian coal producers in Siberia typically pay about $25/ tonne, for hauls of about 4000 km.

Even if adequate commercial arrangements can be made with Russian railways, Russia"s Pacific ports are currently close to capacity. In 2006, the eastern port capacities were: Vostochnoy - over 15 mtpa; Posyet - over 1.9 mtpa; Nakhodka - 0.4 mtpa; and Vanino - 0.6 mtpa. Combined, the ports shipped 18.3 million tons in 2006. Several expansion projects are currently underway.

In addition to questions of physical port capacity, there are likely to be difficulties in gaining access to port terminals, which are largely controlled by Russian coal companies or their marketing arms. In 2004, China attempted to export products, particularly coal, from a region adjacent to theRussian ports of Posyet and Zarubino, where they proposed to construct new terminals. The Russian government advocated the use of existing port facilities by Russian companies, and didn"t feel that it was appropriate to rent out port terminals to foreign companies.

The estimates in Table 4.1 of costs for rail freight through China and Russia are not necessarily the prices that Mongolian coal will be charged. Nevertheless, these numbers suggest that there is a highly significant cost advantage in exporting through China. Moreover, the cost estimates for Russian rail are likely to be under-estimates, and the total cost of Russian exports does not leave much profit margin with current coking coal prices.